Folks like to talk about weapons and weapon skills in Fallout.  I'm one of those folks.  Since I played the original Fallout, I disliked how the skills were organized.  Even in Fallout: New Vegas, I wasn't entirely happy with how I laid out the skills (though I was glad that Big Guns went away).  Instead of going through all of the reasons at length, I'm going to summarize, below:

1) In a game where a player makes an investment in a variety of skills, I believe those skills should be applicable from the beginning of the game to the end of the game.  In F1, that wasn't the case with Small Guns/Big Guns/Energy Weapons.  In F:NV, it was true for Guns and EWs, but it resulted in a lot of weapon role redundancy between the two skills.

2) I believe taking different skills should change the gameplay of the character.  This really has never been true between Small Guns/Guns/EWs.  You pretty much use all of them the same way, especially because of role redundancy or application overlap (cf. Laser and Sniper Rifles in F1, Anti-Materiel Rifle and Gauss Rifle in F:NV).  It's also not true of Unarmed/Melee Weapons.

3) Not really my beef, but often comes up from other players: EWs in F:NV don't feel suitably powerful compared to conventional firearms.  This comes from 1), where I wanted players in the early game to have access to items that consistently made use of their EW skill.  Thus, you end up with Laser Pistols and Plasma Pistols that don't feel dramatically different from 9mm Pistols and .357 Magnum Revolvers.  They're all starter weapons.

4) Again, not a personal concern, but an issue for many players: there are a ton of weapons and ammo types in F:NV.  Even taking subtypes out of the mix, there are far more base types than in any other Fallout game, and an arsenal of weapons -- some people like this, some don't.  My concern as a designer is that people are overwhelmed by the number of items and cease to be able to sort, distinguish, and make intelligent choices about what to use, and when.  And the more weapons there are, the more difficult they are to balance.

I think there are a number of ways that you can organize weapon skills in Fallout.  Based on discussions I've had recently about the above problems, I advocate reducing skill point pools further, folding more skills together, and cutting down the number of base weapon and ammo types.  Guns and EWs become Guns, Melee Weapons and Unarmed become Melee, and Explosives stands alone (but absorbs Flamers, Incinerators, and like weapons).

Doing this, you could cut a large number of similar ammunition and base weapon types (e.g. 9mm, 20 Ga. 12.7mm, .357 Magnum, .45-70 Gov't, .50MG and their related weapons), have three weapon skills that feel distinctive, and allow laser and plasma weapons to occupy only mid- and high-end power roles (e.g. Laser Pistols get introduced around mid-game, with weapons like the Plasma Rifle appearing in the late game).

The main consequence from a role-playing perspective would be that certain character concepts would not be consistently viable.  The post-apocalyptic cowboy and grunt would be missing their Brush Guns and LMGs because those roles would likely have been supplanted by EWs (or reduced in power, replacing other items like Trail Carbines/Assault Rifles).  In this regard, it would be similar to F1 in progression, but without the late-game skill shift.  It may be that mods could help conventional firearms creep up into the heavens, but the intended design would imply that players who take this approach are essentially handicapping themselves.

From my perspective, balancing and loot distribution would become much easier and I'd have more confidence that players would intuitively "get" the sort of gameplay they expect when they focus in one of the three weapon skills.  I've seen way, way too many players fumble around with F:NV's arsenal during playtests and Let's Play videos to have confidence that more than 50% of the players are making informed decisions (pre-patch Service Rifle against NCR Heavy Troopers when there's an AMR in your inventory? OKAY!).  Perks would also have to be re-organized and, in some-cases, re-designed, but in some cases, this would clearly be a good thing (e.g. almost all of the Melee/Unarmed-oriented perks would no longer need redundant either/or skill conditionals). 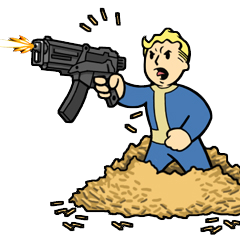 J.E. Sawyer
I was born and raised in southeastern Wisconsin, received a B.A. in history from Lawrence University, and have been working as a video game designer in SoCal since 1999.